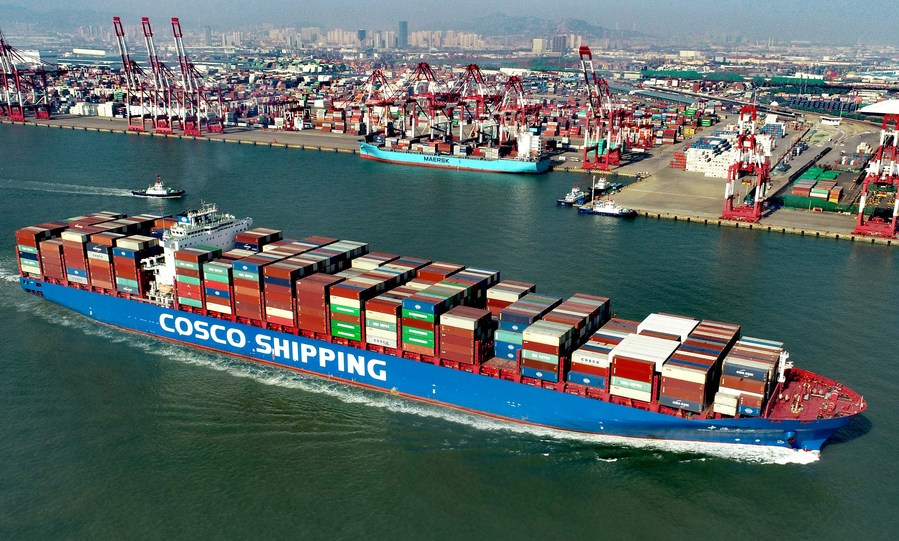 China's foreign trade will continue its upward trend this year, though it is vital for the government and exporters to curb the pressure brought by high commodity prices and shipping container costs, experts and business leaders said on Monday.

They commented after the General Administration of Customs announced that China's foreign trade soared 28.2 percent year-on-year to 14.76 trillion yuan ($2.31 trillion) in the first five months of this year, reflecting that China's exports and imports are picking up growth momentum that is increasingly driven by domestic demand as well as booming overseas orders.

Chen Bin, executive vice-president of the Beijing-based China Machinery Industry Federation, predicted that second-quarter results will show that China's export growth remained strong in that period, as the COVID-19 pandemic saw a resurgence in export-oriented countries such as India and Vietnam.

Ding Yifan, a senior research fellow at the Institute of World Development at the Development Research Center of the State Council, said, "If both foreign and domestic manufacturers in these countries are severely disrupted by the pandemic and stop working, it will generate an impact on the global supply chain, and many orders may continue to return to China."

The country's total foreign trade expanded 26.9 percent year-on-year to 3.14 trillion yuan in May, while it imported 1.42 trillion yuan of goods from global markets, up 39.5 percent.

The monthly import growth in May underscores that domestic demand has increased amid the construction and investment revival, even though the surging price of raw materials and a low base effect also count, said Mei Xinyu, a researcher at the Beijing-based Chinese Academy of International Trade and Economic Cooperation.

To ensure production, Chinese manufacturers have started to build their stocks, driving the rapid growth of imports of products including energy resources, said Gao Ruidong, chief macroeconomist at Everbright Securities.

The value of goods trade between China and the United States grew 41.3 percent year-on-year to 1.82 trillion yuan.

Liang Ming, a researcher at the Chinese Academy of International Trade and Economic Cooperation, said: "We found that the structure of China's foreign trade is optimizing. For example, the contribution of processing trade is gradually increasing. China's high-tech companies from the private sector, State-owned enterprises and foreign-funded companies have all performed well to date this year."

With many countries setting goals to further cut carbon emissions, Chinese electric vehicle manufacturer Nio Inc announced last month that it will start exporting vehicles to Norway in September as the first step of its globalization campaign.

William Li, Nio's CEO, said the company will start to take orders in July. The vehicles will be made at its plant in Hefei, Anhui province.

Li said the company's passenger vehicles will be available in five European countries by 2022. The company has also been discussing the possibility of entering the US market, he added.