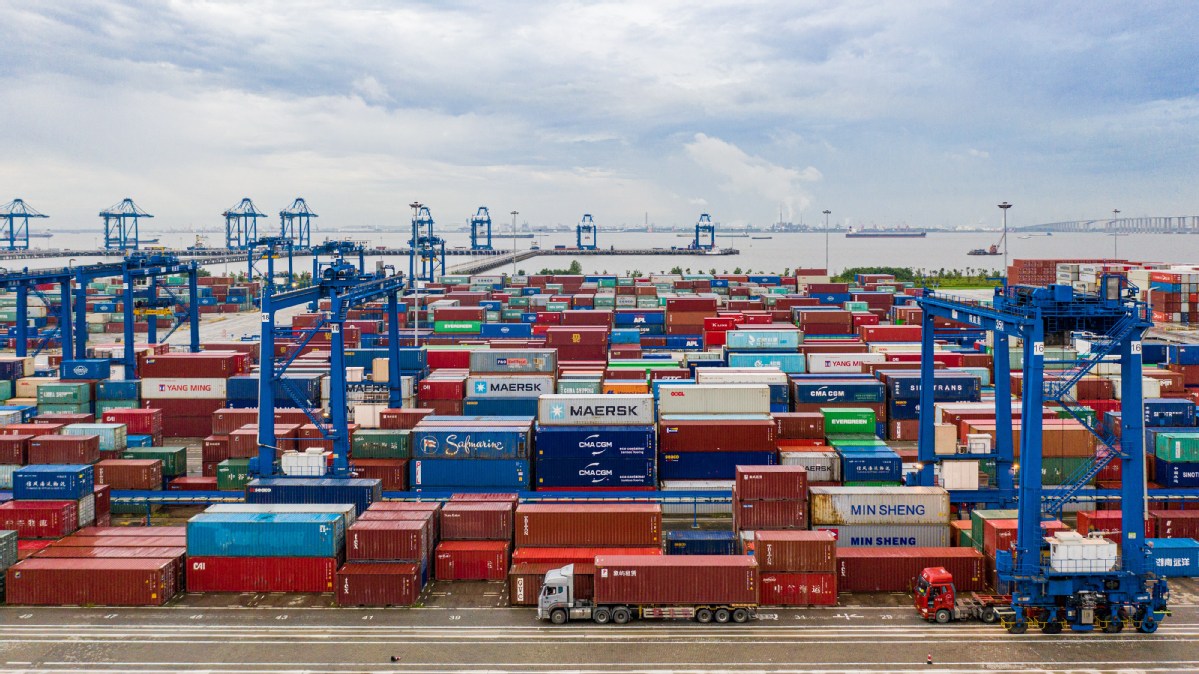 An aerial view of a port in Nantong, Jiangsu province, on July 8. ZHAI HUIYONG/FOR CHINA DAILY

Brisk activity at ports across China is set to be one of the most visible effects of the ongoing global recovery, a think tank said.

The container shipping industry is projected to see recovery this year, mainly due to East Asian economies, especially China's effective measures to control the COVID-19 pandemic and rapidly resume work and production, said a report released by the Center for Forecasting Science of the Chinese Academy of Sciences.

The Outlook of Container Throughput at Global Top 20 Ports in 2021 report estimated seven out of the top 10 ports will be in China, and the growth rate of the country's container throughput is seen increasing considerably.

On the whole, the demand for container shipping services of most ports in China will increase in 2021, especially in the ports of Ningbo-Zhoushan in Zhejiang province, Shenzhen in Guangdong province and Tianjin.

"According to our prediction, nine of the top 20 container ports in the world will be from China, and the development of China's container transport is playing a major role in boosting overall development of the world," said Xie Gang, associate research fellow with the Academy of Mathematics and Systems Science of the Chinese Academy of Sciences.

Xie told a news conference in Beijing on Wednesday that the container throughput of most ports in the world will display a recovery, except for negative growth in the port of Kaohsiung in Asia. The Top 20 ports in 2021 will be more or less similar to those in 2020.

"As the largest trading nation in goods, China has become a key manufacturing hub globally, creating a huge demand for container shipping."

The report said ports in China's Yangtze River Delta region are projected to see a rapid growth in container shipping this year. The Port of Shanghai is set to remain the largest container port in 2021, handling 45.6 million to 46 million twenty-foot equivalent units (TEUs) so far this year, with a year-on-year increase of 4.8 percent to 5.7 percent.

Other Chinese ports on the list include Shenzhen Port, Guangzhou Port, Qingdao Port, Tianjin Port, Port of Hong Kong and the Port of Xiamen.

Global trade is ready for a strong but uneven recovery from the disruption of the coronavirus pandemic and sluggish activity, the World Trade Organization said.

Estimates by the WTO showed that the volume of world merchandise trade is expected to increase by 8 percent in 2021 after a 5.3-percent drop in 2020, rebounding from the pandemic-induced collapse that bottomed out in the second quarter of last year.

Experts said the recovery in global trade this year is strongly supported by China's rapid resumption of work and production and its steady economic recovery, while warning of mounting uncertainties amid COVID-19.

The latest data from the General Administration of Customs showed China's foreign trade climbed 27.1 percent year-on-year to 18.07 trillion yuan ($2.79 trillion) during the first half.

Tang Jianwei, chief researcher at the Financial Research Center of the Bank of Communications, spoke highly of China's better-than-expected export and import performance, saying exports will stabilize in the second half of 2021.

A new report released by the Financial Research Center of the Bank of Communications said China's exports denominated in US dollars are projected to jump 13 percent year-on-year in 2021, and the year-on-year growth rate of imports is set to reach 18 percent for the whole year.

The report said China's economy is expected to rebound steadily and its GDP is likely to grow 8.8 percent year-on-year in 2021.