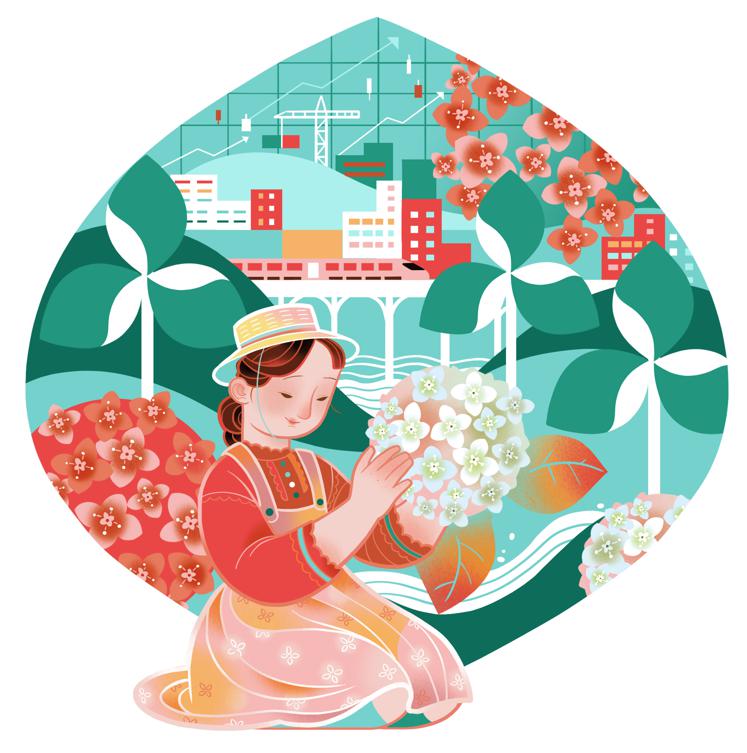 President Xi Jinping has pledged that China will make every effort to peak its carbon emissions before 2030 and achieve carbon neutrality before 2060.

But why is China giving such importance to these two climate goals?

China has done so because it will help it to decide the country's future course of development.

In the past 40-odd years, China's economy has grown at an average annual rate of 9.4 percent, thanks to the improvement in production efficiency brought about by technological progress and institutional innovation. The abundance of labor and the role workers have played in China's industrialization have been vital factors promoting its economic growth.

China has made important institutional innovations. Through robust investments in land and real estate, a large amount of fixed assets have been created, a part of which has been used as collateral to get bank loans, which together have expanded social credit.

To a large extent, China's persistent efforts to advance industrialization have played a crucial role in the country's rapid economic development. But at a time when China has entered the higher stage of industrialization and when the growth rate of its total factor productivity has slowed down, it is difficult for it to maintain high economic growth. This largely explains why realizing carbon neutrality has become so important for China.

Reindustrialization, greater efficiency in resource allocation through deeper reforms and wider opening-up, and realizing carbon neutrality are some of the factors that could produce the second "miracle" for China's and the world's economic and social development.

Reindustrialization means digital transformation of industries. The use of big data and artificial intelligence to drive industrial transformation can significantly improve total factor productivity. As one of the elements needed for "reindustrialization", new infrastructure construction will revolve around industrial reform and infrastructure construction for industrial internet, such as 5G base stations and cloud computing equipment.

The construction of 5G base stations in the next five years is expected to cost 1.3 trillion yuan ($201 billion), or 260 billion yuan per year, but it will create lots of investment opportunities.

China has built the most complete industrial chain in the world, but it has not been able to form a "closed loop" for some key components and technologies. So the future development of industries such as civil aviation, aircraft and spacecraft engines, and integrated circuits will possibly improve total factor productivity. Maintaining a certain proportion of manufacturing is conducive to total factor productivity improvement, and deeper reform and wider opening-up will boost the efficiency of resource allocation.

This is the most important way to boost China's total factor productivity growth. If China improves its efficiency in investment and resource allocation following the principle of competitive carbon neutrality, it could create a new economic miracle.

The huge investment opportunities created throughout the process of realizing carbon neutrality will not only help boost China's economy in the short term but also influence its overall socioeconomic development in the long run. In its 2021 annual report, the International Renewable Energy Agency has stressed that in order to comply with the 2015 Paris Agreement, the world needs to achieve net zero carbon dioxide emissions by around 2050.

According to the agency's estimates, the total global investment needed to achieve all Paris Agreement goals is as high as $131 trillion. China's current carbon emission is about 10 billion tons. If the agency's calculation is correct, to realize carbon neutrality, China will need an investment of 255 trillion yuan－and the impact of such a huge investment on the country's economy and society will be much greater than imagined.

So what will be the mode and path of China's economic transformation on way to realizing carbon neutrality?

All industries have formed their upstream-downstream relations and constitute the links in the industrial chains. We can find in these links some "nodal industries", those that hold key positions in the national economy and are related to other industries. Identifying such nodal industries and accordingly formulating industrial policies and making corresponding technological changes will help produce multiplier effects in the economy.

The need for China is to establish an effective carbon pricing mechanism and promote differential carbon pricing in different regions to produce a positive impact on production and other economic activities.

But to realize carbon neutrality China has to rely on a large number of micro-market subjects, and entrepreneurs have to build stronger industrial chains to promote the further development of the national economy. As for the authorities, they have to ensure that the micro, small and medium-sized enterprises maintain their smooth operation and boost their production.

The author is dean of Guanghua School of Management, Peking University.

The opinions expressed here are those of the writer and do not necessarily represent the views of China Daily and China Daily website.