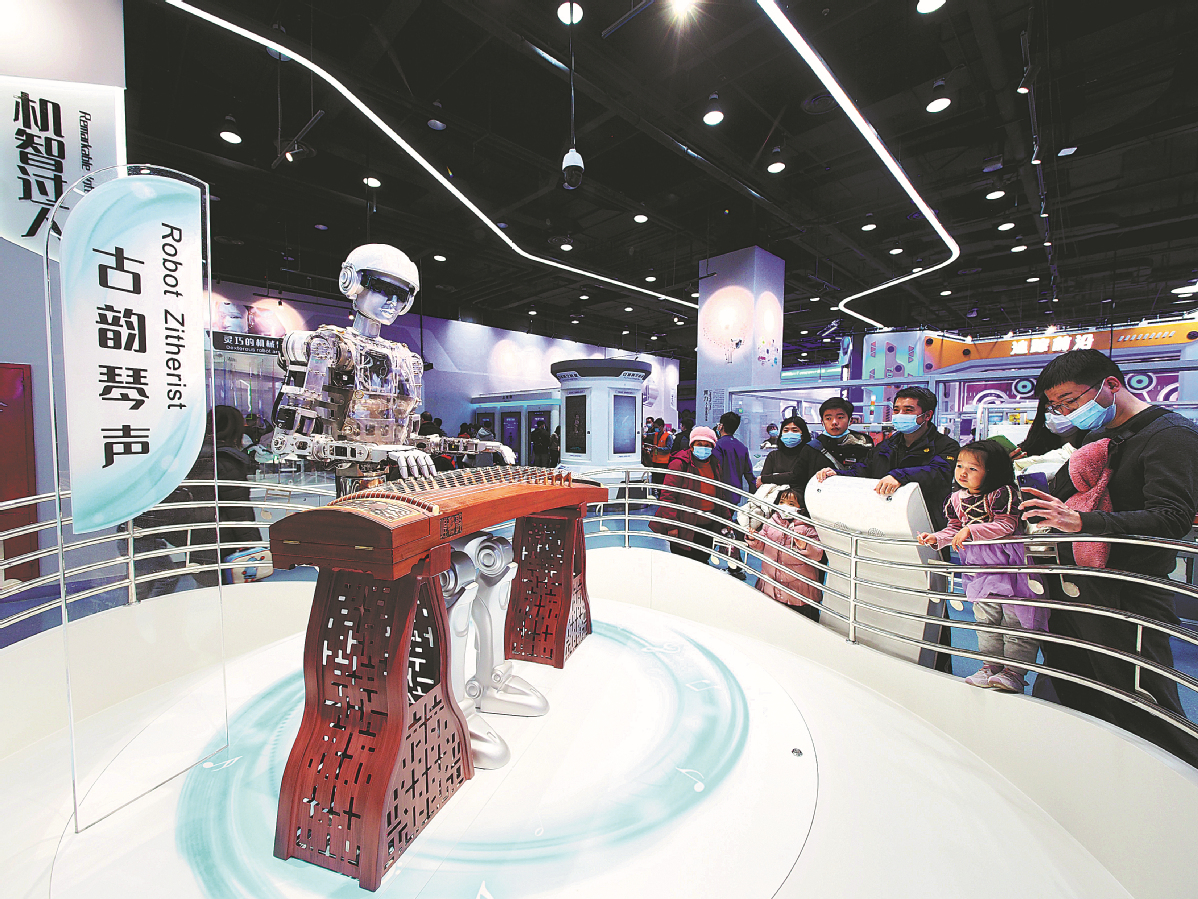 A robot zitherist plays a zither for visitors at the China Science and Technology Museum in Beijing. [Photo by Du Jianpo/for China Daily]

They attributed their expectations to China's plan to develop the digital economy during the 14th Five-Year Plan period (2021-25).

They also said innovative digital technologies like big data, cloud computing and artificial intelligence are increasingly being integrated into all other sectors of economic and social development. This trend is injecting new impetus into global economic recovery as well, they said.

The added value of the core industries in the digital economy will account for 10 percent of GDP, up from 7.8 percent in 2020, according to the plan unveiled by the State Council, China's Cabinet, on Wednesday.

By 2025, China will establish a market system for data elements and see the digital transformation of industries reach a new level. Moreover, digital public services will become more inclusive and a sound governance system for the digital economy will be established, said the plan.

"Facilitating the growth of the digital economy is of vital importance to cultivate new driving forces, boost high-quality and innovation-driven development and effectively address the unbalanced development in society," said Long Haibo, a senior researcher at the Development Research Center of the State Council.

Technologies like big data, cloud computing, artificial intelligence and the internet of things are evolving fast and finding a wide range of applications across industries and other economic sectors, speeding up their integration with the real economy, Long said.

Long also noted that more efforts are needed to make breakthroughs in core and basic technologies, expand the industrial application scenarios of leading technologies as well as strengthen the protection of data security and personal information.

China's digital economy was worth nearly $5.4 trillion in 2020, up 9.6 percent year-on-year, ranking second in the world, according to a white paper released by the China Academy of Information and Communications Technology, a government think tank.

He spoke highly of the nation's intensified efforts to develop the digital economy, which will inject fresh impetus into the country's economic growth and speed up digital and intelligent upgrades in enterprises. The in-depth integration of digital technologies with the real economy will further reinforce China's advantages in global supply chains, he said.

The digital economy has become a major driver of economic recovery amid the COVID-19 pandemic and network security provides a good foundation for boosting the digital economy, said Zhou Hongyi, founder of cybersecurity company 360 Security Group.

Zhou said internet-driven companies should collaborate with traditional industries, and leverage their advantages in technologies, talent and capital to support the latter's digital transformation.

"The next five years will be a golden period for pushing forward digitalization, and the governments around the world have attached great significance to digitalization," said Kitty Fok, managing director of market consultancy IDC China.