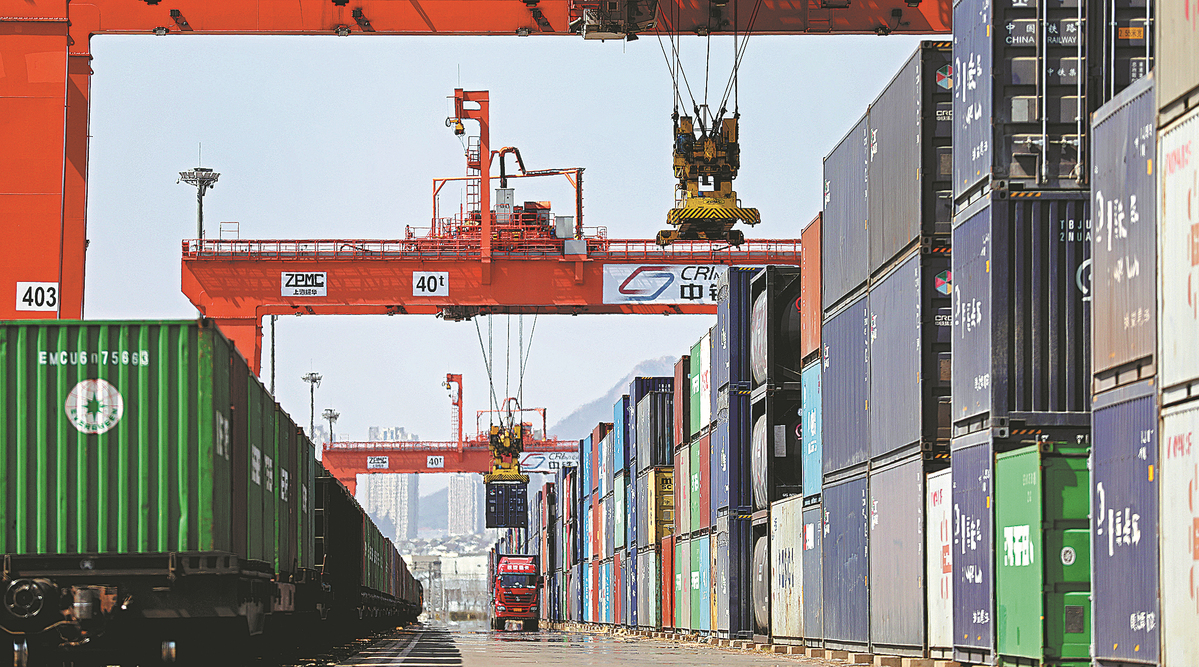 Containers are piled up at a port in Dalian, Liaoning province. [Photo/Xinhua]

The risk of the US economy slowing down and even falling into recession could add another layer of uncertainty to the Chinese economy in terms of export growth and financial stability, underlining the necessity for China to strengthen its domestic economy, experts said.

Worries over a potential US economic recession have plagued markets as investors doubt whether the US Federal Reserve's aggressive tightening will manage to tame US inflation without triggering a hard landing of the world's largest economy.

US stocks swung after the Fed's half-percentage point rate hike on Wednesday, with the S&P 500 up 2.99 percent on Wednesday but down 3.56 percent on Thursday to close at 4,146. 87 points.

This followed transitory inversions of a part of the US Treasury yield curve－the yield of 10-year US government bonds dropped below the yield for two-year bonds in late March and early April－which is seen as one of the key harbingers of economic recession.

But the risk could increase going forward, Subbaraman said, as the financial services group forecasts that the cumulative probability of a US economic recession from now to the end of 2024 is fairly high at between 35 and 40 percent, with higher risk in the second half of 2023 and 2024.

US economic growth is likely to start slowing in the second half of this year, he said, given factors such as tightening monetary and fiscal policies and rising commodity prices that impair demand.

He noted that a possible US slowdown could hurt Chinese exporters because they mostly sell goods to US consumers while consumption of goods could cool more sharply than the whole US economy as spending shifts from goods to services as the Omicron wave fades.

"I think China is going to be negatively affected by the US slowdown and probably more so than you would realize just looking at aggregate US GDP growth," Subbaraman said.

Signs have emerged that China's export growth could face downside risks. An indicator of manufacturers' new export orders dropped to 41.6 in April from 47.2 in March, pointing to a deeper contraction in export orders, said the purchasing managers index survey released by the National Bureau of Statistics.

Hu Zhihao, deputy director of the National Institution for Finance &Development, said the global financial landscape could become more turbulent as recession risks for the United States and the world economy have risen.

As the world's second-largest economy, China can withstand the external headwinds by strengthening its internal economic circulation, Hu said.

He called for measures to further boost domestic demand with fiscal support, minimize supply-chain disruptions brought by the pandemic and optimize industry regulations to promote the healthy development of the property and internet sectors.

Mortgage rates have inched down this year as part of the nation's efforts to optimize property sector regulations. The interest rate for newly issued individual housing loans dropped to 5.42 percent in March, down 17 basis points compared with the beginning of the year, the People's Bank of China, the nation's central bank, said on Friday.