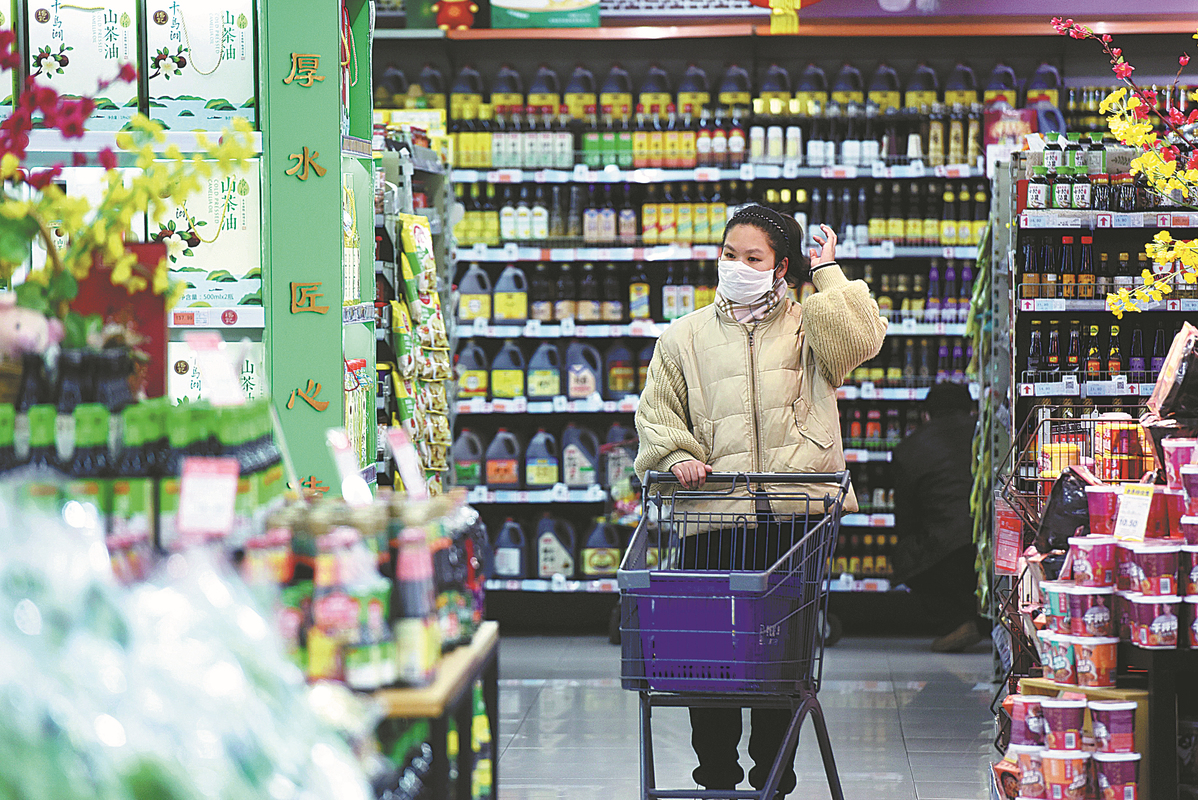 A shopper checks out groceries at a supermarket in Hangzhou, Zhejiang province. [Photo by Long Wei/for China Daily]

Policy easing may intensify to stabilize growth and tackle any risks

Inflation in China is likely to remain mild this year and the government could intensify policy easing to stabilize growth and tackle potential risks generated by monetary tightening in the United States, economists said on Wednesday.

The country's consumer price index, a main gauge of inflation, rose 1.5 percent year-on-year in December, down from 2.3 percent in the previous month, the National Bureau of Statistics said on Wednesday.

Wen Bin, chief researcher at China Minsheng Bank, said that domestic inflation is likely to remain mild and unlikely to constrain the country's monetary policy, which means that policymakers will intensify policy support and roll out supportive measures ahead of schedule to ensure the economy operates within a reasonable range.

Wen said that Chinese policymakers need to ensure a stable domestic financial environment for the ongoing economic recovery and they should be prepared to tackle negative effects from the policy shift by the US Federal Reserve.

"Policy tightening by the US Fed has become a consensus by the market. But there are uncertainties around the timing and intensity of the tightening and unexpected risks still remain," he added.

China is scheduled to release its full-year economic data, including its annual GDP growth rate, next week.

Analysts expect that more policy easing will be launched in the first quarter to shore up growth. They also anticipate that China's consumer inflation will see a mild rise this year while producer inflation will gradually decline as a result of effective government policies to stabilize prices and ensure stable supplies of commodities and products.

"Falling PPI inflation and low CPI inflation will mean inflation will not be a barrier to Beijing launching more supportive policy easing and stimulus measures in 2022," said Lu Ting, chief China economist at Nomura Securities, in a research note.

"Amid the ongoing growth slowdown and due to the high base in 2021, we continue to expect year-on-year PPI inflation to drop steadily in 2022 into the low single digits. CPI inflation could pick up after the current COVID-19 wave, but will most likely remain below 3 percent," Lu said.

He added that low inflation would also increase the likelihood of a slight cut in interest rates by the Chinese central bank, though the space remains quite limited.

Pan Helin, executive director of the Digital Economy Academy of the Zhongnan University of Economics and Law, said that as China's domestic inflation is expected to remain mild and global inflation pressure is likely to slightly ease in 2022, Chinese policymakers could consider moderately loosening macroeconomic policies to spur growth.

There have been signs of improved monetary conditions as China's broad money supply, or M2, rose 9 percent year-on-year in December to 238.29 trillion yuan ($37.44 trillion). The growth rate is 0.5 percentage point faster than that of the previous month, according to the People's Bank of China.

New social financing, or funds the real economy receives from the financial system, stood at 2.37 trillion yuan in December, up 720.6 billion yuan year-on-year, according to the PBOC.

Ouyang Shijia contributed to this story.